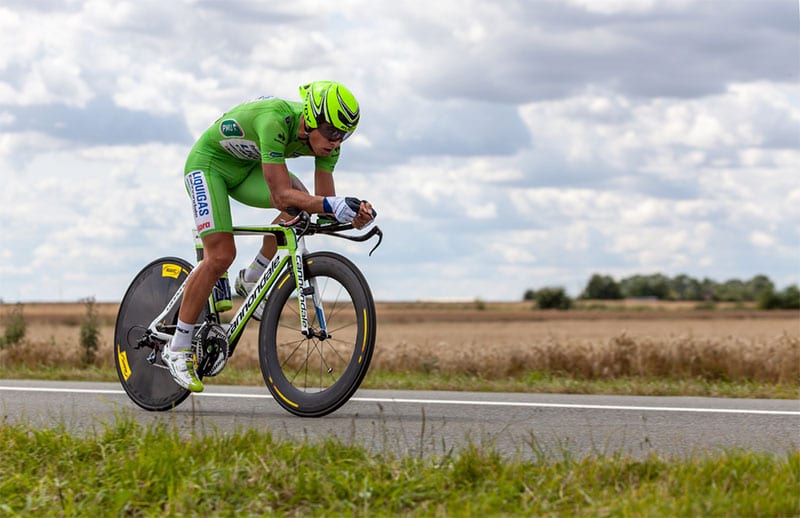 The Slovak professional bicycle racer was spotted with the new 100% Speedcraft glasses that use magnets to increase performance. The glasses use magnets which can be seen extended at the nose area that helps the rider’s nasal passage widen to intake more air. This, in turn, improves breathing and airflow, according to the brand. The magnets were created by AC Breathing systems which specialize in snow sports, athletics, and motocross. It uses a stuck patch on the skin to attach themselves on and are included with the glasses.

The Speedcraft Air Glasses sport many features that work well for athletes like reduced airflow space between athlete’s face and frame as well as a 2-mm, cylindrically cut lenses along with a strong rubber coated frame and lenses. This is for comfort and minimizes fogging which can be a nuisance for many. The lenses themselves have the famous 100% UV protection that consists of UVA, UVB, and UVC and to make things sweeter, even throws in a hydroleophobic exterior surface coating for enhanced protection against water and dirt. This isn’t the first Peter Sagan has used these glasses and the reason is not about just looking good.

Since the People’s Choice Classic which Peter won along with Tour Down Under, he has been spotted with glasses more often recently. Fortunately, there are plans for a wider release of the glasses later this year and a ton of more information about these magnets so do keep visiting this space for more news later. Peter Sagan has been supported 100% for at least a couple of years now and is seen atop podiums standing adorned with 100% goggles.

Reasons Your Ankles Hurt When Running

END_OF_DOCUMENT_TOKEN_TO_BE_REPLACED

Stinky Shoes: How to Get Smell Out of Stinky ...

END_OF_DOCUMENT_TOKEN_TO_BE_REPLACED

How to Convert Womens to Mens Shoe Size